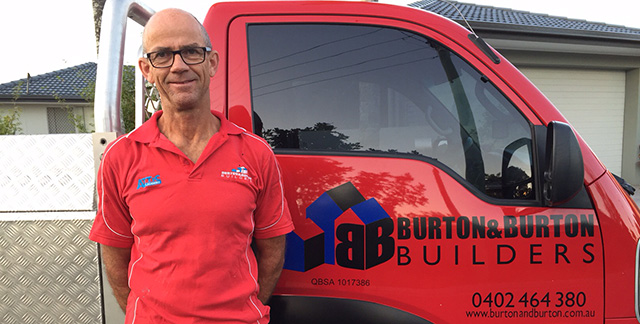 Steve has been building on the coast since 2001 firstly as a carpenter and then he obtained his Builders License and so began Burton and Burton Builders! Because of Steve’s background in engineering he has an eye for precision and will not settle for anything not 100%.

Before getting into building as a profession Steve built his own double story 60 Sq. house which was quite a feat for an amateur doing the majority of the work himself. This gave him a great grounding and understanding of all aspects of what was involved in building a house.

Steve went on to gain his Carpentry Certification and then his Building Licence. He formed his business Burton and Burton Builders and has continued to grow with a number of repetitive clients and continued word of mouth advertising.

Steve is a perfectionist and only employs or recommends trades that he himself would stand by.

With Burton and Burton Builders having Steve at the forefront, you will get an honest hard working company which will deliver you a superior product that both you and Steve will be proud of.

This brokerage currently has no active listings..
Check back soon.

It takes less than a minute. If you already have an account login.

Enter your email address and we'll send you a link you can use to pick a new password.